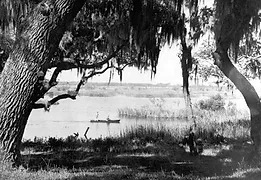 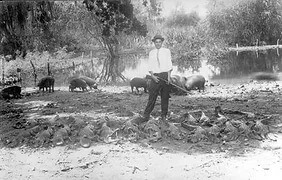 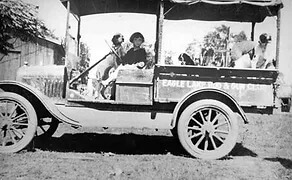 Eagle Lake is on Highway 90A east of the Colorado River and fifty miles southwest of Houston in southeast Colorado County. The town is beside a 1,400 acre lake also known as Eagle Lake. Below the lake is the Lower Lake. Both lakes are privately owned and are leased for hunting and fishing.

Eagle Lake's history stretches back to the time when the vast prairies were abundantly covered with tall grass, wild flowers and wild game. The Karankawa Indians were known to have settled here. They fished in the lake, ate the alligators, and used the grease from them to ward away the mosquitoes. Legends have grown around the presence of the Indians, and the earliest known version of "The Legends of the Lake" was printed in the "Morning Star", published in Houston June 13, 1839. Later, it was reprinted by the "Richmond Telescope". "The Legends of the Lake" is a romantic tale of two ill-fated lovers beside the waters of the lake.

Eagle Lake is marked on early Texas maps. The name was probably given in 1821 by William W. Little and James Beard, two of Austin's scouts, when one of them killed an eagle on the lake and called the water "Laguna del Aquila". The original Austin Land Grant was approved April 23, 1823. In 1824 land along the east side of the Colorado River was quickly claimed. The original grantees were Rawson Alley, Gabriel Shaw Snider, A.W. McLain and J.W. McNair, James Ross, James Nelson, C.C. Dyer, Thomas Cartwright and Andrew Rabb. On March 22, 1838, Patrick Reels was granted 2,391 acres on the shores of the lake, adjoining land grants owned by A. L. McLain and James McNair. In 1848 this grant was patented to the heirs of P. Reels by the state. Gamaliel Good along with D.W.C. Harris purchased 2,300 acres of Patrick Reels property in 1856. It was divided among Good and his sons. Good subsequently deeded half interest in 600 acres to DeWitt Clinton Harris a director of the Buffalo Bayou, Brazos and Colorado Railway. Together they planned the town to be a station on a new railroad between Harrisburg and Austin. The rails reached Eagle Lake in 1859. Later the Southern Pacific, the Cane Belt, the San Antonio and Aransas Pass, and the Santa Fe railroads all made Eagle Lake accessible for shipment of crops and, later, of gravel.

Judge J. J. Mansfield, a distinguished congressman from Texas, began his law practice in Eagle Lake. Mansfield edited a small newspaper titled "The Canoe". In 1888 Mansfield was elected County Judge of Colorado County. On September 13, 1888 Mansfield issued the order of incorporation of Eagle Lake. Captain J.W. McCarty was the first mayor and T.W. Eldridge was the first city marshall. Eldridge was the founder of Sugar Land Industries. 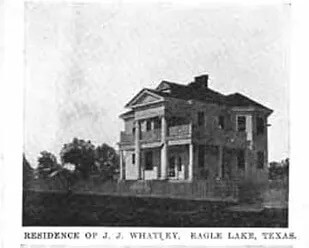 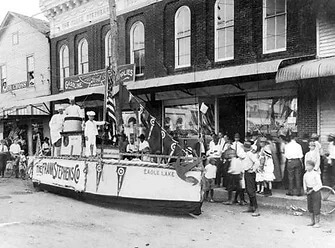 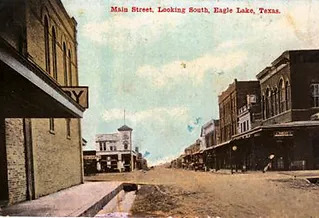 After the Civil War, Capt. William Dunovant started raising sugarcane and built a sugar mill at Lakeside, on the eastern shore of the lake. In 1913 the mill was sold and moved to Jamaica. Dunovant also introduced the cultivation of rice irrigated by lake water in 1896. Thereafter, employees pumped water from the Colorado River to the lake and then into canals, irrigating the rice. Some of the rice was irrigated by shallow wells. John Linderholm of Chesterville expanded the rice industry, irrigated by wells, to the prairie north of Eagle Lake. Rice mills were also established in Eagle Lake. In the 1980s the mills were gone, though rice culture was still one of the major local industries.

Huge sand and gravel deposits were mined west of the lake, leaving stretches of water for fishing and water skiing and bringing the manufacture of concrete products to Eagle Lake. Numerous bones of ancient animals were found in the gravel mines. Production of both oil and natural gas in the area also contributed to the economy. In the 1960s Eagle Lake became a recreational center for hunting geese and ducks that wintered on the prairies in the rice stubble and around the lake.

Eagle Lake has long been a shipping center. At one time there were three rail lines serving the area. Today, oil, cattle, rice, sand and gravel shipments make Eagle Lake the second largest point of tonnage shipped on the Southern Pacific between San Francisco and New Orleans.

The growing of rice on the prairies surrounding the town has attracted a vast number of ducks and geese to the area. The fine hunting prompted Eagle Lake to be proclaimed the "Goose Hunting Capital of the World".